Father Peter Geromel, OHI Th.M., Rector at St. Peter the Apostle, grew up in Flint, Michigan, the son of an Anglican priest. He was raised in that tradition, and his parents before him. Homeschooled through high school, he attended VMI, completing his “Rat” year, before transferring to Hillsdale College to study Philosophy. He matriculated to Reformed Episcopal Seminary, earning a Master of Divinity cum laude, followed by a Master of Theology from Cranmer Theological House. He also holds a Master of Humanities from the University of Dallas and has taken several graduate courses at Villanova University. Presently, he is completing a Doctor of Ministry at Reformed Presbyterian Seminary in Pittsburgh (the 4th oldest seminary in the U.S.) focusing on catechesis (Christian education). He has written four books, Christ & College: A Guide from the Anglican Way, Sublime Duty: Its Emphasis in the Anglican Way, Frankincense and Mirth on High, and Arrows & Chariots: A Thematic Journey through Philosophy’s History.

Unapologetically Anglo-Catholic in his theology, Fr. Geromel grew up around clergy from varied churches, Greek and Russian Orthodox, Maronite and Byzantine Catholic. He was involved in Young Life, Intervarsity Christian Fellowship, Canterbury Club, and Boy Scouts in his youth. He has been serving for over a decade in parish ministry, as well as three years as a full-time hospice chaplain, and six as an adjunct professor in Philosophy. He has served in parishes throughout the South, including South Carolina, Tennessee and Texas. He is a priest in the Order of the Holy Innocents, a society dedicated to Life and Bioethical issues. His other ministries have been varied, including working for food pantries and as a chaplain to truck drivers in New Jersey. Presently, he is an adjunct professor in the Philosophy and Religious Studies department at Radford and an instructor at St. Bede’s Anglican Catholic Theological College.

In addition, he is canon missioner for the local diocese and chaplain for Pack 145 in Christiansburg.

He is married to Kari, who is from the Carolinas, and they have three sons. Kari was raised in a Bible-believing church, attended Appalachian Bible College, and was training to be a missionary to Muslims in the United Kingdom when they met. They enjoy hiking and outdoor activities and watching “Brit Crimes” and comedy together. Fr. Geromel likes to play Scottish snare drum and Bodhran to Celtic music and fiddled once upon a time. 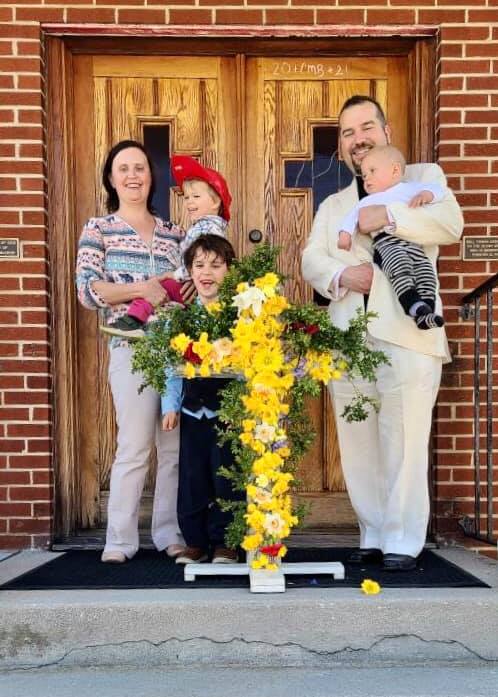 Fr. Geromel’s focus on ministry is “incarnational,” believing in non-anxious and prayerful presence in the community. Christ said, “ye shall be witnesses unto me both in Jerusalem, and in all Judaea, and in Samaria, and unto the uttermost part of the earth” (Acts 1:8). In this way, the center of an incarnational ministry is the local “temple,” the church. The Apostles began by participating in the daily prayers in Solomon’s Temple at Jerusalem (Acts 3:1), and slowly moved out concentrically in missionary effort. Likewise, the priest (and congregation if they wish) begins with the daily prayers at the local church each day, and then the missionary and evangelistic effort ripples out from there; works of mercy and pastoral visitations begin and end at the altar of God. This is consistent with the Anglican tradition’s Benedictine model of ora et labora (prayer and work, or prayer and effort) and enshrined in the Book of Common Prayer (pg. 19, 1662 BCP) and Canons of the Church (Canon 12.1.01). Cf. Acts 2:42, 46; Daniel 6:10; Hebrews 10:25.