The Anglican church tradition is well-known to you, whether you realize it or not. It is the church of writers like Shakespeare, Jane Austen, the Scotsman, Walter Scott, and detective thrillers Agatha Christie and Dorothy Sayers. John and Charles Wesley were Anglican priests the whole of their ministries. Numbering among other Anglican ministers were authors Jonathan Swift of Ireland, who wrote Gulliver’s Travels, and Lewis Carroll, who wrote Alice in Wonderland. C.S. Lewis, perhaps the best-known Christian writer of the 20th century, said, “I am a very ordinary layman of the Church of England.” Theologian J.I. Packer was one. So is Alister McGrath and Bishop N.T. Wright. George Washington, Robert E. Lee, Edmund Burke, William Wilberforce, who helped abolish the slave trade in the British Empire, – resilient and persevering characters of the past – all of them were unpretentious Christians living their faith the best they could, in “quietness and confidence,” humbly and in the Anglican way. 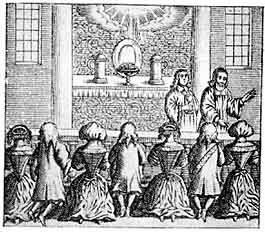 The Book of Common Prayer and Anglican worship is familiar to you as well. Its phrases and terms have become almost as important in the English language as the King James Bible (and that version too is read from every Sunday by Anglican Catholics). “To have and to hold . . . for better for worse, for richer for poorer, in sickness and in health . . .,” “Erred and strayed,” “Ashes to ashes, Dust to dust,” “We commit his body to the deep,” “Here endeth the lesson,” all these are from the Book of Common Prayer. Anglican hymns like Amazing Grace or O Come, O Come Emmanuel mark the times and seasons in your life. They are a common cultural heritage and it is no surprise that the words are like old friends. Many denominations in the 20th century borrowed heavily from the Prayer Book in their worship services – the Presbyterian Book of Common Worship (1947), The Methodist Book of Worship (1964), The Lutheran Common Service Book (1917) – to name just a few. It is also admired by many Nazarene pastors and has been used for teaching purposes at their seminary in Kansas City over the years. Some have remarked in surprise after visiting that they grew up practically worshiping with the Book of Common Prayer and never knew it!

Does your congregation hold to the 39 Articles of Religion? That is a bit like asking if we hold to the Bible! We uphold the Bible as Christians and we uphold the Articles of Religion as Anglicans, definitely. Yet the minute we investigate further, things get complicated very quickly concerning both the Bible and the Articles. Why? Because the Bible (and the Articles) require a hermeneutic, a principle of interpretation. For the Bible, one sound method is the “historical-grammatical method” which looks at the author’s own intent, given the original language and original historical circumstances. This is a very conservative hermeneutic which safeguards the inerrancy of Holy Scripture. We safeguard this! The same method can be used towards the Articles of Religion, and by that method requires us to look at the specific circumstances surrounding the writing of the Articles of Religion, rather than later circumstances and concerns. (Looking at later issues to interpret an earlier document leads to a progressive or “open” reading, rather than a conservative one.) The Articles, unlike Scripture, are not self-interpreting (the less clear verses explained by more clear verses). Instead, the Articles require outside information as the key to interpreting them. Specifically, the Articles respond to particular, not general, late Medieval abuses in faith and practice. Methodical in a similar way, the Anglican Catholic Church applies a very conservative lens of interpretation through the Affirmation of St. Louis, by which first Scripture itself, then Church Fathers and early Councils of the Church, provide the foundation of our study of both Scripture and the Articles.

Indeed, many Anglicans who more explicitly endorse the Articles than we do, arguably, have some difficulty squaring their modern practices with the Articles that they profess. For example, within a “three streams” understanding of Anglicanism in which she is Catholic, Evangelical and Charismatic, the charismatic part should be asked for an explanation how some neo-Pentecostal practices therein relate to historic Anglicanism. For example, “speaking in tongues” is not, on the surface, consistent with the Article 24, “IT is a thing plainly repugnant to the Word of God, and the custom of the Primitive Church, to have publick Prayer in the Church, or to minister the Sacraments in a tongue not understanded of the people.” Speaking in tongues in the Pentecostal/Charismatic tradition, at face value, is in contradiction with this Article as much, if not more so, than the Anglican Catholic contention that there are Seven Sacraments (2 Gospel/Dominical and 5 minor) rather than Two (and only Two), according to a “face value”, uncritical, reading of Article 25.

The fact is that the Articles of Religion, while a monolithic confessional document within Anglicanism, is not the sine qua non of Anglicanism (and was only intended for subscription by ministers, officials, students and teachers, not common laity, as a teaching standard and legal contract made with the English Church and State by ministers of both Church and State). For instance, The Church of Ireland, from the time of the Reformation has been “Anglican” but had their own Irish Articles of 1615 (more Reformed). The Scottish Episcopal Church, clearly of the Anglican tradition, did not subscribe to the Articles of Religion until the early 19th century, rather treasuring the Articles of Perth of 1618 (more Catholic)! The Protestant Episcopal Church in the USA never required subscription to them by her clergy; they were always “historical documents” since the time of American Independence, and it is a recent American phenomenon, amongst groups severing themselves from that Mainline denomination, that the Articles have taken on a “Confessional” status for particular Anglican jurisdictions operating in the United States. Just like the Book of Concord amongst the Lutherans, the Articles of Religion have contested value among even conservative groups calling themselves Anglican. Just like the Reformed churches, which have a variety of confessional documents (Scotch, Belgic, Heidelberg, Helvetic, Westminster) yet clearly one “Reformed” tradition, global Anglicans outside the Church of England can have a variation in binding documents. The Anglican Catholic Church upholds the Affirmation of St. Louis as the hermeneutical lens through which all other Anglican formularies are to be interpreted, and unapologetically proclaims that this documents upholds the Vincentian Canon, the belief in “that which has been believed, at all time, everywhere, by all” far better than the all-too-often less careful reading of the Articles by a variety of well-meaning and pious Anglican thinkers and jurisdictions.

Still Curious? Scroll below or read

If you are from a Wesleyan, Methodist or Pentecostal background, your roots lie deep within Anglicanism. John and Charles Wesley, after all, were Anglicans. The Welsh Methodist revival, so influenced by the Anglican priest, George Whitfield, but led in many respects by great preachers such as Daniel Rowland, remained within the (Anglican) Church of Wales from its beginning in 1735 until 1811. Primitive Methodism in Ireland remained a steadfastly (Anglican) Church of Ireland movement for much of the 19th century. Similarities between Anglican Catholics and early Methodism can be read about here.

An important influence on both Methodism and later Anglo-Catholicism was the movement called the “Non-Juror” churches, in England and Scotland, which remains little known in America, but which existed from the late 17th century to the early 19th century before merging back into the Anglican Communion. One of the most remarkable of the Non-Jurors was the eccentric medical doctor and bishop, Thomas Deacon. His, no doubt, incorrigible and impulsive son, Thomas Theodorus, like many Non-Jurors (and the Wesley brothers own mother!), was a “Jacobite,” loyal to the Stewart line of succession to the Throne of England, Scotland and Ireland. The mere twenty-two year old, Thomas Theodorus, at his place of execution as a traitor to the Crown, made this noteworthy (if a bit idealistic) profession of Faith:

“I profess I die a member, not of the Church of Rome, nor yet of that of England, but of a pure episcopal church, which has reformed all the errors, corruptions, and defects, that have been introduced into the modern churches of Christendom: a church which is in perfect communion with the ancient and universal Church of Christ, by adhering uniformly to antiquity, universality, and consent: that glorious principle, which if once strictly and impartially pursued, would, and which alone can, remove all the distractions and unite all the divided members of the Christian Church. . . .”

When doing so, he very much summed up the goal and intention of those who profess themselves “Anglican Catholics” today.

Anglican and Catholic (Taken from the ACC website.)
The Anglican Catholic Church is worldwide body of Christians with churches in the United States, Canada, Great Britain, Australia, Africa, India, and South America. We are Anglican because our tradition of prayer and worship is rooted in the Church of England and its Book of Common Prayer. We are Catholic because we believe and practice the universal or catholic faith of the church.

The word “Catholic” is often understood in opposition to the word “Protestant.” However, this is both a recent and uniquely western perspective. In the ancient church, catholicism was understood to be the opposite of heresy, or false belief, and even today there are millions of Christians in Greece, Russia, and other parts of the world who consider themselves neither “Catholic” nor “Protestant,” but “Orthodox.”

During the sixteenth century, the Church of England sought to modify certain beliefs and practices that had developed over the centuries and appeared extraneous, unwise, or divergant from apostolic faith and practice. In doing so, the church did not abandon its catholicism; rather it engaged in a process of reform. As Bishop John Bramhall wrote in the seventeenth century, “our religion is the same it was, our Church the same it was…differing only from what they were formerly, as a garden weeded from a garden unweeded.”

Anglicanism, then, is best understood as a reformed catholic faith. Likewise, we believe that the church is in need of continual renewal and reformation. It must oppose the errors of every age in order to “contend earnestly for the faith which was once delivered to the saints” (Jude 1:3).

A Faithful Tradition
In recent years, a number of Anglican jurisdictions have moved away from this historic and apostolic faith. This is why in 1977 an international congress of nearly 2,000 Anglican bishops, clergy and lay people met in St. Louis, Missouri, to take the actions necessary to establish an orthodox jurisdiction in which traditional Anglicanism would be maintained.
Acting according to the principles determined by the seven great Ecumenical Councils of the ancient Church and adopting initially the name “Anglican Church of North America,” they placed themselves under the jurisdiction of the retired Episcopal bishop of Springfield, Illinois, the Right Reverend Albert Chambers. Bishop Chambers expanded that jurisdiction and devolved it upon others, by taking order for the consecration of four more bishops, and the Anglican Catholic Church was born.